Premium build, slimmer form factor
The iPad Air features a brand new design and now, it just looks like the big-screen version of the iPad mini, unlike previous iterations. The iPad Air (Wi-Fi only version) is about 200 gram lighter than the iPad 4 at 453 gram. It is also thinner and narrower at 240 x 169.5 x 7.5mm, but the biggest visible change comes in form of the cropped side bezels. These help in accentuating the iPad Air’s brilliant screen-reducing distraction and improving on the overall look.
The front of the iPad Air is dominated by its 9.7-inch Retina display featuring the same resolution (2048 x 1536 pixels), and pixel density (254ppi). Above the display, you see a 1.2MP FaceTime HD camera, while the usual Home button lies below the display.

The iPad Air might weigh less, but it feels as solid as its predecessors. It features a unibody aluminium chassis that exudes a premium feel. It now sports metal buttons as opposed to plastic. The volume rocker (it now comprises two separate keys and not a unified one) and Mute switch, sit at at the right edge and offer great tactile feedback without being wobbly. The Power/ Screen lock switch sits at the top along with the 3.5mm headset jack. The bottom edge features two stereo speakers and a lightning connector port. The speakers offer good quality, loud sound output.

Turn the iPad Air and you’ll notice that unlike the previous iPad, there’s no slope at the edges and the frame just rounds subtly. Also, the iPad Air’s back is now Silver or Space Gray with White and Black front panels, respectively. Earlier versions had a silver back for both colour variants. By the way, the iPad Air also features chamfered edges at the front, just like the iPhone 5 and 5S, in line with the premium design elements.

At the back, you’ll see a 5MP camera, the shiny reflective Apple logo and iPad branding, and two microphones (one for noise cancellation). The dual microphone setup helps in enhancing the quality of sound while making Internet calls via FaceTime or other video calling apps.

The dimensions-to-weight ratio of the iPad Air makes it easy to lug around and hold, compared to other 10 inch tablets. So you don’t need to compromise if you like big screens. Compared to the previous generation iPad, it’s more convenient to read an ebook on the iPad Air. 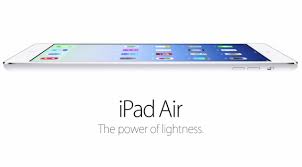 Display and Camera
The iPad Air sports the same 9.7 inch Retina display that we’ve seen on the iPad 4, sporting a resolution of 2048 x 1536 pixels and pixel density of 254 ppi. The iPad still offers one of the best 10 inch screens and text, images and videos appear crisp and sharp. There’s not much competition in the 10 inch tablet space. The Samsung Galaxy Note 10.1 (2014) does feature a screen that sports a higher resolution (2560 x 1600 pixels) but comes at a higher starting price of Rs 49,990. The Kindle Fire HDX which also features a higher resolution screen isn’t yet available in India.

The 5MP rear camera on the iPad Air does a decent job if you use it to capture images in daylight, however, images shot indoors in artificial light look grainy. It can be used to shoot video of 1080p resolution. The 1.2MP front camera is just functional and is good for FaceTime video chats. We’re not sure if a large number of users would capture video or images with a 10 inch tablet, as it’s a bit cumbersome. Having said that, the iPad Air still does a decent job for that occasional click or two.

Processor, Performance and Battery Life
The iPad Air has got a major upgrade when it comes to the internals. It’s now powered by Apple’s A7 chip which is based on 64-bit architecture. This is the same chip that powers the iPhone 5s, and Apple claims it offers twice the CPU speed and graphics performance. As we mentioned in our iPhone 5S review, the speed bump is not related to the processor being 64-bit. Though it lays the foundation of the future; the 64-bit architecture will help in better memory management and will work in tandem with apps optimized for it as they’re made available. We were able to play all games, including relatively simple casual games like Subway Surfers and Temple Run, and graphics intensive ones like Infinity Blade II and Snowboard Hero, without any hiccups or lags. We were also able to run multimedia apps like iMovie and GarageBand without encountering any stutters.

The apps launched and loaded faster compared to previous-generation iPads. One thing that’s also worth pointing out is that the iPad Air doesn’t heat up after continued usage unlike the iPad 4 and iPad 3.

The iPad Air, just like the iPhone 5S, also features the M7 co-processor which dedicatedly handles the task of measuring data from motion sensors like the accelerometer and gyroscope without involving the main processor, leading to better battery life. It also has the ability to recognize different kinds of motion through this data. The data is more accurate and can be used by fitness tracking apps and health apps such as pedometer apps.

Apple claims that the iPad Air offers a battery back-up of up to 10 hours if you surf the web on Wi-Fi, watch videos or listen to music. While Apple has reduced the size of the battery with the Air (32.4 watt vs 42.5 watt), the battery back-up claimed is still the same. We’d say that this estimate is on the conservative side and even with continuous HD video playback, the iPad Air will survive for more than 10 hours. It will last one and a half to two days with moderate to heavy use, connected to a Wi-Fi network.

We got a Wi-Fi only variant as our review unit but the iPad Air is also available in cellular (3G) models. It’s worth pointing out that unlike the iPhone 5S, the iPad Air does not support the existing 4G Indian frequency band (Band 40 – 2300MHz). We did not encounter any issues while connecting to Wi-Fi networks and got stable, fast connections.

iOS 7 on the iPad
The iPad Air runs on the most recent iOS 7, the newest version of Apple’s mobile OS. The OS brings a radically overhauled user interface design including new icons, native apps and a number of new features. It features a new Parallax Motion effect, making the background wallpaper shift by utilizing the iPhone’s accelerometer, giving an appearance of depth and strips off skeuomorphic elements like leather and felt, and bevelled buttons, that have been replaced by flat shapes and gradients, and text.

The tablet version of iOS 7 was released a little late and had been criticized for being buggy. It was even alleged that Apple had developed iOS 7 keeping in mind the iPhone and had rushed up with the OS’ tablet version. The iPad Air runs version 7.0.3, which we found to be pretty stable. We didn’t experience crashes while running all native apps and commonly used third party apps such as Facebook, Twitter, Zite and Flipboard, among others and some popular games. 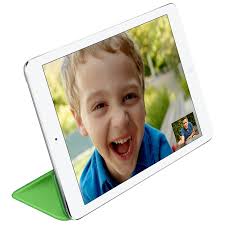 We do feel that some elements such as the Notification Centre take up too much of screen space and look awkward. Some native apps, including the Notes app and the Music app, also look like they’ve not been designed keeping the tablet’s big screen into consideration. Apple still doesn’t offer native apps for Calculator, Weather, Compass or Voice Memos, which are bundled with the iPhone. Of course there are third-party alternatives available in the App Store. With iOS 7 you can also make audio calls through FaceTime Audio with the iPad Air.

The Safari app offers a desktop like tabbed interface, but other new features have been included. To know more about iOS 7, you can read our detailed review.

In terms of third party apps, the iPad is still far ahead of other tablets with more than 475,000 iPad optimised apps being available for download in the App Store. This one factor alone makes the iPad a better buy than Android tablets, where most apps are primarily designed for phones and look stretched.

Apple also offers a good selection of music through the iTunes Store, though its movie catalogue in India still lags in comparison to the US catalogue.

Overall, Apple’s app and content ecosystem make the iPad a compelling proposition for anyone looking to buy a tablet.

Verdict
The iPad Air is still the best 10 inch tablet available in the market. Its new sleeker design and compact form factor are reasons enough for picking it up over any Android or Windows tablet, but it is terms of quality apps that it is still miles ahead of the competition. The starting price of Rs 35,900 appears to be steep, but it’s an investment worth making, particularly if you want nothing but the best. In fact, flagship 10 inch Android tablets from the likes of Sony and Samsung are more expensive, and lack tablet optimized apps.