Apple’s latest tablet, iPad Air, has been widely praised for its sleek design and thin form factor as well as zippy performance. However, Android tablets are not too bad and can offer a better proposition, especially when the iPad’s price tag and storage capacity comes into question.

So, we did a head-to-head comparison between Apple iPad Air, Samsung Galaxy Note 10.1 (2014 Edition) and Sony Xperia Tablet Z to see which is the best large-sized tablet in the market right now. Here’s what we found…

Display
Both iPad Air and Galaxy Note 10.1 have great displays, each with its own advantages. Colours are more vibrant in the Samsung tablet’s 10.1-inch display (it has three screen modes) and sunlight visibility is better. On the other hand, iPad Air’s 9.7-inch display is brighter. Content consumption, of course, depends on the aspect ratios of the two tablets.

In the display race, Sony’s Xperia Tablet Z (10.1-inch) seems like an also ran. The colours are just about good enough, brightness is okay at best and the viewing angles as well as sunlight visibility are quite poor.

Winner: Both iPad Air and Samsung Galaxy Note 10.1 have splendid screens. However, the warmer colours of Samsung tablet give it a slight edge.
Design and looks
In the looks department, iPad Air beats every competitor. It is thinner, lighter and much sleeker than any other tablet in the market. The only one that comes close to the new Apple tablet is Sony’s Xperia Tablet Z, which is, in fact, thinner (7.5mm for Apple vs 7.5mm for Sony). However, iPad Air is still sleeker overall and its metal body gives it the premium look.
The one area where Sony’s tablet beats iPad Air hands down is durability. It is the only top-end tablet that is water-resistant, dustproof and has shatter-proof glass body. These features make it much more durable than any other model out there.
A mention must be made of the faux-leather back panel of Samsung Galaxy Note 10.1. The tablet turned quite a few heads when we took it out, with many an envious glance towards its back panel. The design is quite good, but the weight (574gram) goes against it, in comparison to iPad Air (478gram) and Xperia Tablet Z (495gram).
Winner: Apple iPad Air
Performance
This is where the iPad Air really outperforms the competition. The Apple tablet is much faster than its Android rivals by a long margin, even after using it for long hours. On the other hand, we suffered a few instances of lag in both Sony and Samsung tablets. Though the lag was only intermittent, we chose to account it in our comparison because you do not pay over Rs 40,000 for a device that does not give a smooth user experience.Winner: Apple iPad Air
User experience
Since the start, iPads have delivered a better user experience than Android tablets because Apple’s App Store has a huge inventory of apps which are customized for iPads. Sadly, this is not the case with Android. The apps in Google’s operating system are created in one size and then stretched for different screen sizes. This does not deliver the user experience that the custom-made apps for iPads are known for.
In the time we spent with the three tablets, some apps (for example Real Racing 3) didn’t look and feel as good on Android tablets as they did on the iPad. Moreover, the apps work much faster than they do on other tablets, previous generation iPads included.
One of the coolest things in Android’s favour is widgets, which give you access to several functions right from the homescreen. Both Sony and Samsung have gone a step further and made available floating widgets available on the screen. You can use the calculator, web browser and a few other apps from the homescreen, move them around, alter their density (to make them more or less visible compared to other on-screen items) and close them with a tap.
Essentially, the functionality of the tablet depends on the user’s taste, but we give preference to a smooth user experience over a few extra software features.

Samsung’s S Pen stylus
One of the key features of Samsung Galaxy Note 10.1 is its S Pen stylus, which brings a host of functionalities to the table. You can draw right on the home screen and create digital scrapbooks, memos etc. The stylus even gives a preview of the actions that certain buttons in apps perform and can be used on capacitive buttons (Home and Back) too. It is a cool tool to have and does make working on the big 10.1-inch screen easier.
We would suggest that you go for the stylus-equipped Samsung Galaxy Note 10.1 if the screen size is too big for you. 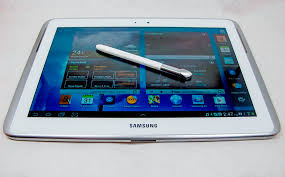 Storage and price
This is one point where both Sony Xperia Tablet Z and Samsung Galaxy Note 10.1 are miles ahead of iPad Air. The 16GB Wi-Fi and 4G variant of iPad Air costs Rs 44,900, with no expandable storage. For each storage expansion, you pay Rs 7,000 extra in the case of iPad Air. A little too much to ask, we say.
At the same price, you can get the Sony Xperia Tablet Z (Wi-Fi and 4G, 16GB and 64GB microSD support) as well as Samsung Galaxy Note 10.1 (Wi-Fi and 4G, 32GB and 64GB microSD support).

Camera
We are not really fans of using the tablet as a camera, but then, if you get the feature, why not use it! Both Android slates here feature 8MP cameras; the Samsung model even has LED flash on the back. iPad Air, on the other hand, has a 5MP camera with no flash.
However, photos clicked with iPad Air have the most natural colours among the three; details of out-of-focus objects in the photos, though, are lost. On the other hand, Samsung’s tablet has a wide variety of camera options by default, which lets you select the best photo or remove objects, as well as choose various modes while clicking photos.

Xperia Tablet Z’s camera quality is also good, but photos lack details here too. Colours are decent, but still not accurate and contrast is just acceptable.

Future proof
All three tablets are top-end and highly priced, so it is only natural to expect them to last you a long while. If this is one of your criteria while purchasing a tablet, then iPad Air is the best choice. The model runs on Apple’s latest A7 processor that can handle 64-bit apps, so it will be ready when more resource-consuming apps become prevalent.

Apple has always been great with software updates, and since iPad 2 (a 2011 model) has received iOS 7 update, we can expect iPad Air to easily get the next three operating system updates. Android gadgets, on the other hand, are not so lucky and both Sony and Samsung tablets are likely to get two more OS upgrades, but after that they will be stuck with an older operating system.

It is quite fast, with no instances of lag during our experience. Battery life is also great and camera quality is also similar to that of iPad Air. It also has the same app and content ecosystem as the new iPad and the same operating system, so the user experience is great. We’d recommend it over the two Android tablets.

Verdict
There’s no doubt that iPad provides the best tablet experience, which is now even better with a thinner and lighter profile. Despite the high cost, we’d recommend it to anyone. If price is a constraint, then iPad 4 is a good option, even though it feels much heavier than iPad Air when held in one hand. Both tablets are future proof and would last you another couple of years (at least) without demanding an upgrade.

If your mind is set on an Android tablet for the open ecosystem, then Samsung Galaxy Note 10.1 is the best option out there. The stylus is more than helpful for productivity tasks and the faux-leather finish is pleasing to the touch.

Sony’s Xperia Tablet Z is a let-down due to its rather lacklustre screen quality. Otherwise, it is the best option if you tend not to be too careful with your gadgets and often drop them. It is quite durable and can resist the elements in spite of its sleek form.