Talk about the idea of writing the book 2 States?I am a Punjabi, born and brought up in Delhi. I was always a curious kid, who was good at two things — maths and telling jokes. In typical Indian middle-class fashion, they tell you to forget about the jokes and focus on maths. And that’s what I did. Today, I make a living out of my jokes and storytelling. 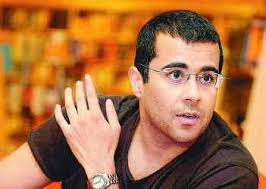 I went to Army Public School and was not a particularly bright student and scored just 76% in Class X. That is when I decided to take on the challenge and got through, first, IIT Delhi and subsequently, IIM Ahmedabad, where I met my Tamilian wife Anusha. Post completing my MBA in 1997, I worked first for Goldman Sachs and then Deutsche Bank, first, in Hong Kong, and the last one year in India, but left them to do full-time writing in 2009. Writing was my hobby, but I never thought that I could have been a career writer.

I wrote three books while I was at the bank, when I met a French journalist friend and he said to me, ‘In all three books of yours, the relationship between the protagonist and the father is dysfunctional. In Five Point Someone, one guy doesn’t like his parents, the other guy has a paralysed father and the third guy has a strict father, in One Night @ The Call Center, Shyam is underconfident and his parents are always fighting. In The 3 Mistakes Of My Life, the father has deserted him and even Ishan’s father slaps him and he has a bad relationship with his father.

So he told me, ‘You have a very turbulent relationship with authority. To us French people, it’s shocking that you have written three bestsellers and are still doing a job. This bank job is a surrogate father. You get that security and authority figure here, but you are rebelling by writing books on the side. You need to deal with the father issue. That will free you as a writer.’ It hit me and I decided to tackle it. I was scared as a typical middle-class person of leaving a secure investment banking job to be a writer. My income would drop by 95%.

My wife, who was and continues to be a banker, coincidentally got transferred to India and with her, I came here. I continued at the bank for a year, but knew that I couldn’t manage to do my job and writing together so finally quit to take on full-time writing and first wrote 2 States, which to me essentially is a father-son story. A lot of people, including Anusha, felt that marrying between communities was not an issue anymore and that people would not be interested. But I was convinced that it was a very big issue and it’s still a very big issue.

The truth is that kids can elope and marry, but they don’t want to do that. They want their parents to agree and smile on their wedding day. There is a line in the book, where the boy says, ‘I don’t want you to just tolerate me, I want you to accept me.’ I have met hundreds of couples who are going through that. I met a sardarji who became a heart patient because his daughter wanted to marry a Keralite. He read the book and not only consented to his daughter’s marriage but at the wedding, there was a food stall, a dessert stall and a 2 States stall. He gave everybody a book as he said, ‘The community is going to ask me why I agreed so, I wanted them to read it. I wanted to see my daughter happy, but the community would have judged me.’

Talk about your father?

I don’t like abuse of power and somewhere down the line, I felt he was not fair to my mother. She did a lot for him, the family, the in-laws, but she never got her due and it was a life lived just like a lot of Indian women who do that. When I was very young, I didn’t realise it but by the time I was a teenager, I started realising and resented it. I was always a rebel. My father being in the army was authoritarian and would deny her simple things like meeting her family, as it would make her happy. Maybe, it was a result of his own inner frustrations, but he would not give her freedom and I had to write 2 States a) to understand where my father was coming from and b) to forgive him. It was difficult for me to forgive him, but 2 States helped me forgive my father. 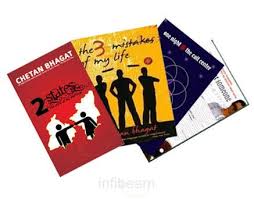 Have you forgiven him?He lives in Delhi and I rarely meet him. I last met him at a family function two years back. Even if not forgiven completely, there is no anger in me today and at least I have reached a stage of indifference. I am still working on it. I have a disproportionate influence today, so I can say these things and I am sure he has his own side. I love my mother the most in the world and know that she has brought me up in hard times. Her relationship with my father was always turbulent and still remains like that. But today, they are separated and she is the happiest I have ever seen her. A lot of time has passed and I’m not looking for an apology as her life cannot be undone, but I try and make her as happy as I can. So, for instance, I bought her a house in Mumbai and am so happy that she is able to see all this for me. When I read about 2 States still being there on Arjun Kapoor’s mother’s shelf, I can’t even imagine how he must be feeling. I asked him what was the most challenging part of doing the film and he told me how he relates to those emotions of pain in the relationship between him and his father, where the relationship is very close and yet there are unmet expectations from both sides.

What attracted you to your wife Anusha?She genuinely is a very simple and yet intelligent person with a very pure heart. I anyway get turned on by articulate, intelligent women. A partner who is intelligent can really help. Being a Punjabi, where would I get a girl from IIM-A? And I like the whole poise that Tamilians have, though sometimes, of course, I feel they are too dry. She never wants to ride my fame and is happy to be Anusha Bhagat who works in a bank. 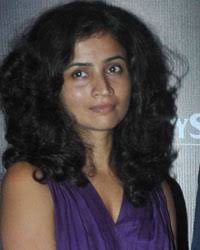 What does it mean in real life for a Punjabi boy like you to get married to a Tamilian girl like your wife?When Punjabis are happy, they will start dancing. Tamilians don’t dance for fun. For them, it’s a form of art. You will not see people dancing at Tamil weddings, but you can’t have a Punjabi wedding without dance. If a Punjabi is sad, you will have a Punjabi aunty expressing her emotions clearly and can even beat her chest for it, whereas for a Tamilian, emotion is taboo and you are expected to suffer. There is no word for fun in Tamil. Anusha comes from a very simple and steady emotional state of family. I was looking at that stability and lack of turbulence and she was looking at that little bit of excitement. And that’s what 2 States is. It’s not about two communities, but also about hum kis tarah ke logon ke saath zindagi bitana chahate hai. 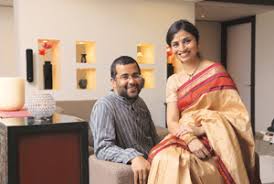 The book has a happy ending, where the father of the boy accepts his choice of marrying the Tamil girl. Did your father agree to your marriage in real life?

Parents are important to all Indian kids. They want to get married, but they also want the blessings, want them happy and want the whole family taam-jhaam to go with their marriage. For me, too, my father mattered and still matters, but in real life, my father did not come for my marriage. After that, he even came and visited us and now it is in neutral gear. I have always been a rebel and it has always been hard to control me. My profession and my fatherhood has however really healed me to an extent that I was able to write a happy ending for 2 States. And today, I have accepted the ending of 2 States as my reality. For my father, the driving thing was control and not the South Indian factor. It was an assertion that the boy chose the girl for himself. It came to a point where I was scared to be a father and, of course, now after having my twin sons, I realise how I was unneccesarily scared and I share a great relationship with them. For me, this is all a healing journey. 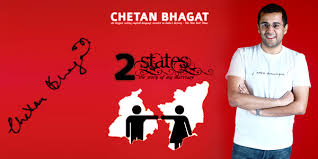