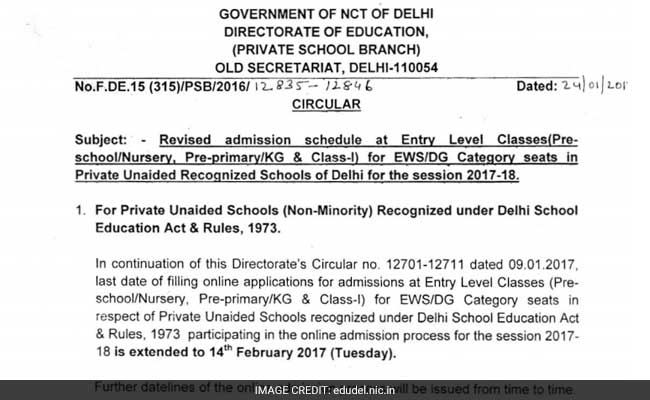 The Delhi government today extended the deadline of the application for admissions in nursery under the economically weaker section (EWS)  and Disadvantaged Group (DG) category to February 14. Earlier, the last date for application was January 31 and the first list was supposed to be announced on February 28, which will now come on March 7. The admission process to the EWS section started on January 11. The admissions process on 25 per cent seats under EWS and Disadvantaged Group (DG) quotas, which have been riddled with irregularities in previous years, have been made completely online by the current Aam Aadmi Party dispensation.

“The candidates will now be able to apply till February 14. The first and second list of selected students will be announced on March 7 and 17 respectively. The admission process will be closed as per earlier schedule only on March 31

DoE has also published the dates for Private Unaided Schools recognized (Non-Minority) by Directorate under Right to Education (RTE) Act, 2009 and Private Schools regulated by Local Authorities concerned to the EWS/DG admission. See the revised dates in this category here:
Last date of submission of application forms in schools: 14/02/2017 (Tuesday)
The date of displaying the first list of selected candidates (including waiting list): 07/03/2017 (Tuesday)
The date of displaying the second list of candidates (if any) including waiting list: 17/03/2017 (Friday)
Closure of admission process: 31/03/2017 (Friday)