What Are You Afraid Of?

After looking unsure of himself, Mr. Gandhi comes back. “There is absolutely nothing I’m afraid of,” Mr. Gandhi said. After watching his father struggle in politics, watching him die, he said, he doesn’t fear losing an election. He said his fight is bigger. “I do not like what I see in Indian politics. The system in this country needs to change,” he said. “This system every day is unfair to our people.”

“We have empowered millions and millions of people through the most powerful legislation that has ever been imposed, the Right to Information Act,” says Mr. Gandhi.

Political parties, including Mr. Gandhi’s Congress, though are lobbying to remain exempt from this act that gives Indian citizens the right to seek information about public bodies. Mr. Goswami doesn’t nail him on this one, or even ask the question

The interview has turned tothe subject of two major riots in India. One in 2002 in Gujarat, where Narendra Modi, the prime ministerial candidate for the opposition party Bharatiya Janata Party, is chief minister. And the other in 1984 in Delhi where 3,000 people mostly Sikhs died in clashes in retaliation for the death of Indira Gandhi, Mr. Gandhi’s grandmother and first female prime minister of India, at the hands of her Sikh bodyguards.

“I wasn’t involved in the riots,” says Mr. Gandhi when he was asked if he would apologize for the 1984 anti-Sikh riots in Delhi.

Rahul Gandhi acknowledges that some Congress party members were involved during the 1984 riots. “Innocent people died,” he said. But so far, he hasn’t really apologized even as Mr. Goswami presses him.

Mr. Gandhi says the government of Gujarat was involved in the 2002 riots. Mr. Modi’s government was “abetting and pushing the riots further,” Mr. Gandhi says. When pressed about the lack of evidence against Mr. Modi, he said repeatedly, “People saw it.”

At halftime, Mr. Gandhi is showing himself to be more of a democratic-process wonk than an inspirational politician. It’s hard to get people fired up about “process.” He delivered a few rallying cries. “We can only be half a superpower if we don’t empower our women,” for one. He said anyone guilty of corruption should be punished, but added, “I’m not a judge.” Time after time, he deferred to parliamentary process. He isn’t his party’s candidate for prime minister, he said, because voters don’t choose the premier. Members of Parliament choose the premier. Instead of taking on Narendra Modi, the firebrand opposition leader who has been declared his party’s prime ministerial candidate, Mr. Gandhi focused his attacks on the Indian political system. “We have to change the way the system works,” he said. “There is too much concentration of power in the system.” Hard to distill into applause lines.

Indian manufacturing to take on China?

Mr. Gandhi said he would like to see India’s manufacturing prowess grow, echoing the federal government’s efforts to increase India’s share of global manufacturing, a race that China has so far been leading.

“I want to make this place (India) at least as much of a manufacturing power as China.” India wants to raise manufacturing’s contribution to the country’s economy to about a fourth of gross domestic product in the next decade from about 15% presently. This should help create about 100 million jobs in the economy, the government says.

On the Aam Aadmi

Asked about the Aam Aadmi Party’s barn storming performance in recent local elections in Delhi, Mr. Gandhi said “We wanted to give them a chance.”

That’s sporting of him, given that his Congress party won eight seats to the AAP’s 28. The two parties entered agreement  in which Congress lent their outside support to AAP in the Delhi assembly.

Mr. Gandhi is asked about poor performance in elections in which he is involved.

”When we win in Karnataka, Uttarakhand and Himachal Pradesh, I am not involved.

Battle of the Degrees

Mr. Gandhi’s academic credentials are challenged. Did he really get degrees from Cambridge and Harvard?

“Did you go to Cambridge?” Mr. Gandhi asks the interviewer.

“I went to Oxford… I was a visiting Fellow there,” retorts Mr. Goswami.

Mr. Gandhi shoots back: “I was at Trinity College Cambridge.

I’m Against the Concept of Dynasty

“I didn’t choose to be born in this family. I inherited it,” says Mr. Gandhi, great-grandson of one of India’s founders, grandson of the first female to lead the country and son of one of its popular prime ministers.

“I’m against the concept of dynasty,” he adds. Dynasty or children or politicians becoming powerful happens everywhere, he adds. “You have to ask why it’s happening…it’s because the system is not open.”

“I can either walk away from responsibility or I can say I can improve it.” Mr. Gandhi says he chose to improve the system.

Bringing in the youth, empowering women and using the energy of the youth, are ways in which he says he is making improvements

Rising prices are a huge political issue in India. Despite prodding from Mr. Goswami, Mr. Gandhi didn’t have a lot to say on a topic that is seriously affecting voters. “I have been working with the Prime Minister on the price-rise issue. I have been in discussions with him,” he said, adding that the government has been in touch with state chief ministers and steps to cool inflation are being taken.

Inflation in India has stayed at painfully elevated levels for over four years now, burning a hole in the pockets of Indians, slowing consumption and investments and as a result hurting economic growth. Wholesale inflation was at 6.16% in December while consumer inflation was at 9.87% during the month.

In Your Heart of Hearts, Are You a Politician Mr. Gandhi?

Mr. Goswami says he’ll wrap up with this question: If Mr. Gandhi was not born a Gandhi would he be in politics?

“In whatever I did, if I saw unfairness I would have stood up against it,” he adds.

Not exactly a resounding “Yes”.

Mr. Gandhi once called power poisonous.  He refers back to that in a description of a looping familial dialectic: “I tell this to my sister and my mother and my mother tells it to me: I don’t get driven by the desire for power, I’m just not driven by it. For me, power is an instrument that can be used to do certain things but for me it’s not interesting to own it, to capture it.

“What are the questions? Why is power so concentrated in this country, why is it that a chief minister has access to any decision that is made in the state.

“Why is it that that perspective of one minister is completely different to the gentleman who follows him?”

Mr. Gandhi defended his recent pitch for the national government to increase the number of gas cylinders offered at subsidized rates to 12 per household from 9.

“I went to West Bengal, I went to Kerala. There, women told me that they need more cylinders,” he said.

But can the country afford it? India is struggling to close a yawning budget deficit and analysts fear that subsidies pledged by vote-seeking politicians will undermine state finances.

Mr. Gandhi turns interviewer and tries to beat Mr. Goswami at his own game.

“The real question is what I am  doing sitting here?” he says.

“What made you want to become a journalist?” he asks Mr. Goswami.

Now he’s started using Mr. Goswami’s own tactics against him. “You’ve not answered my question properly,” he tells the interviewer. 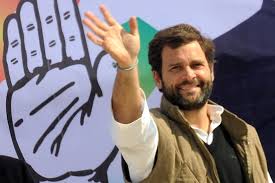