Wearable smart-devices represent the next stage in mobile computing and Google Glass is the most hotly-anticipated gadget in that space. It is not an extension of your Android smartphone or tablet, but is a whole new gadget in itself that can perform various day to day tasks, without you ever moving your hands.

Google’s project program for developing a line of hands-free, head-mounted intelligent devices that can be worn by users as “wearable computing” eyewear.

Google Glasses will look like a pair of normal eyeglasses, but the lens of the glasses will be an interactive, smartphone-like display, with natural language voice command support as well as Bluetooth and Wi-Fi connectivity. Google Glass will be powered by the Android mobile operating system and is expected to offer compatibility with both Android-powered mobile devices and Apple iOS-powered devices. 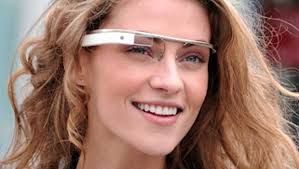 Just say the word and Google Glass will take a picture or record a video – you will never have to touch the hardware. The photos and videos will be stored on the 4GB flash memory of the device, and can also be shared on social networking websites or emailed.
Show messages
Google Glass will show you text messages as well as emails you receive and allow you to reply to them via voice commands.
Find information
If you are in the habit of Googling things a lot, you will find that your task has been made easier by the new Glass. You simply need to ask a question and the device will pull the answer from the internet. For example, you can ask when Taj Mahal was built or to give you a few photographs of the monument and the device will provide appropriate replies on the small screen in front of your eye
Show maps
The widely used Google Maps are integrated into Glass, so that users will be able to chart the course of their journey or look up locations or establishments via voice commands
Live video sharing
Google Glass can show the world what you are seeing – live! If you are attending a family function, your child’s school play or a concert, you can share the feed with your friends and family in real-time and make them a part of the experience.
Integrates Google Now
Google Now, the digital voice assistant from the search giant, has been integrated in this device. It will keep track of your daily habits, such as when you leave for office or the route you take. It will give you alternate routes if there is traffic on the way or give you weather updates periodically, among various other functions.
Translate
This is a neat feature that may come in handy when you travel abroad. You simply need to ask Google Glass to translate a phrase or sentence from one language to another and it will speak that out.

Google Glass has the ability to take photos and record 720p HD video. While video is recording, the screen stays on.

A touchpad is located on the side of Google Glass, allowing users to control the device by swiping through a timeline-like interface displayed on the screen. Sliding backward shows current events, such as weather, and sliding forward shows past events, such as phone calls, photos, circle updates, etc.

For the developer Explorer units:

There was speculation that Glass may launch early, before the end of 2013 but no announcement has been forthcoming from Google. Google has however announced that another round of invites will be sent out to those who wish to buy a Google Glass Explorer edition, with existing users able to invite up to three friends. Which could mean that the original consumer model will have to wait until well into 2014.