Tablets are fast replacing desktops and laptops as users’ primary device for content consumption across the world. The Consumer Electronics Show at Las Vegas this year saw the launch of many tablets, from professional-grade tablets to dual-boot models, by both international and Indian manufacturers.

The tablet will be powered by Qualcomm Snapdragon 800 processor running at 2.3GHz (Indian version may come with an Exynos Octa chip). A professional-grade tablet, the model runs on Android 4.4 with the all-new Magazine UX and can show four running apps on the screen at once. 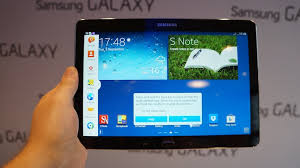 2.Alcatel One Touch Pop 8
Alcatel also unveiled new 7- and 8-inch tablets at CES. The One Touch Pop 8 is an Android tablet equipped with an 8-inch display (1280x800p), powered by a 1.3GHz quad core processor and 1GB RAM. The tablet features a 2MP rear camera and a VGA front facing camera.

3.Lenovo ThinkPad 8
Positioned as a premium 8.3-inch Windows 8.1 tablet, the ThinkPad 8 is powered by a 2.4GHz Intel Z3770 quad-core Bay Trail processor and 2GB RAM. It sports a Full HD display with 10-point multi-touch and comes with 8MP rear camera and 2MP front camera.
4.Panasonic Toughpad FZ-M1
Targeting enterprise users, Panasonic showcased the latest version of its rugged Windows 8.1 tablet. The Toughpad FZ-M1 comes with a 7-inch touch display (1200x800p) with glove touch technology and optional stylus support. It’s also the first tablet to be powered by fourth-generation Intel Core processor (Haswell)
5.Acer Iconia A1-830
You might mistake it for the iPad mini with its aluminium back, but Acer’s new 7.9-inch tablet is more of a mid-range Android device. Powered by a 1.6GHZ dual-core Intel Atom Clover Trail+ Z2560 processor and 1GB of RAM, the tablet checks the right boxes in the design department.
6.Micromax LapTab
Indian smartphone brand Micromax made its presence felt at CES with this Intel-powered dual-boot Windows and Android tablet hybrid. It is powered by 1.46GHz Intel Celeron processor, 2GB of RAM and has a 10.1-inch IPS display (1280x800p).The tablet comes with a keyboard cover that can be used to switch it to laptop mode.