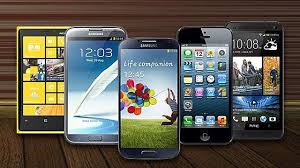 Samsung Galaxy S4 is among the most easy to repair smartphones in the market nowadays, with a repairability score of 8 out 10. According to iFixit, it is very open to the S4 in order to access the internal components and the battery is easy to replace. However, components are affixed to the back of a fused display assembly, making it posing a difficulty in repairing the device.
Google Nexus 5 (Score: 8/10)
Google’s latest smartphone, Nexus 5, gets a repairability score of 8 out 10. iFixit says that the phone is easy to open, minimal amount of foam has been used in its construction and most components are easy to replace. However, its display is integrated into the front panel and the device is held together by plastic chips that are hard to remove.
BlackBerry Z10 (Score: 8/10)
BlackBerry Z10 also has a repairability score of 8, giving it a spot in list of the most easy-to-fix smartphones. iFixit says the battery of the handset is very easy to replace and the device is very easy to open because of the standard screws. However, some small components are attached too securely, making it a little difficult to fix or replace them
Samsung Galaxy Note II (Score: 8/10)
Samsung Galaxy Note II is also rated among the most easy to repair smartphones, with a score of 8. Since the battery is user removable, it is very easy to replace and the internal components can be accessed quite easily. Parts fused to the back of the display assembly are difficult to remove, says iFixit
Samsung Galaxy S III (Score: 8/10)
Samsung Galaxy S III also finds a place in the easy-to-fix smartphones with a repairability score of 8. The device is quite easy to open and the battery can be replaced conveniently, says iFixit. However, changing some components is rather difficult as they are fused to the display assembly.
Moto X (Score: 7/10)
Moto X gets a repairability score of 7 from iFixit, with its modular design being its biggest strength when it comes to fixing it. The design allows individual component to be replaced easily. The phone uses only a single type of screw, making it easy to access the internals. However, the rear cover is fixed too securely, making it difficult to open.
Apple iPhone 5 (Score: 7/10)
iPhone 5 also gets 7 points out of 10 when it comes to repairability. The battery as well as the front panel are easy to replace in the iPhone 5. However, in order to open the device, you need to have Apple’s pentalobe screwdriver.
Google Nexus 4 (Score: 7/10)
Google Nexus 4 gets a repairability score of 7 on the back of an easily removable back cover. It also has pressure contacts that make it easy to take apart. However, its battery is stuck in place too securely and can be quite hard to remove.
Apple iPhone 5S (Score: 6/10)
The flagship iPhone 5S fares poorly in terms of repairability, getting a score of 6 by iFixit. Its battery is placed too securely, making it difficult to remove and the handset can only be opened by using the proprietary pentalobe screwdriver. Nevertheless, the front panel can easily be removed and replaced in case it develops a problem
Apple iPhone 5C (Score: 6/10)
The new iPhone 5C also gets a low score of 6 on iFixit’s repairability index, with the difficult-to-remove battery and proprietary pentalobe screwdriver posing the main challenges. The saving grace is its front panel, which is easy to remove and replace.
HTC One (Score: 1/10)
HTC One has a repairability score of just 1, making it the most difficult smartphone to fix. Though its unibody construction makes it quite sturdy, it is extremely difficult to open the rear panel without causing physical damage to the handset. The battery is placed under the motherboard and affixed to the midframe, making it hard to remove.
← Previous Post
Next Post →