It was a Rs 10,000-a-month allowance from their parents for almost 18 months that helped Sachin Bansal and Binny Bansal launch an e-commerce site retailing books in October 2007. Today, the about 20% stake they hold, along with the top management, in Flipkart is valued at almost Rs 2,000 crore.

Sachin Bansal, the chief executive of Bangalore-based Flipkart, says he has a knack for underestimation. That is exactly what happened in March 2011 when he and Binny Bansal, who are not related to each other, announced they would reach the $1 billion (Rs 6,100 crore) sales mark in 2015.

Last week, the site, which now sells everything from books to electronics, apparel and jewellery, reached the milestone, a full year ahead of the target. “To say billion-dollar in 2011 was crazy when we were doing a $10 million (Rs 61 crore) run rate,” says Sachin, 32, in his first interview after the company achieved the sales target. 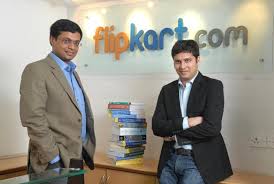 Staff says Bansal duo demanding bosses, yet simple people
“It was just a belief.” Sachin, like his co-founder , grew up in Chandigarh. That is not the only coincidence. Both went to IIT-Delhi and worked at different companies for about a year before ending up in the same team at Amazon.

It was during this stint that the two decided to form a startup. The duo pooled in Rs 2 lakh each and with two computers launched the site from their two-bedroom apartment in Koramangala, a primarily residential locality in Bangalore where the company now has multiple offices. For 10 days, the site did not see a single sale and then a customer from Andhra Pradesh placed the first order for the book ‘Leaving Microsoft to Change the World’ by John Wood.

“We were not thinking about numbers then, but we knew something big can be built out of e-commerce,” says Binny.

The two co-founders, who have a tendency to finish each other’s sentences in conversations, are close friends. What has helped maintain the bond through the ups and downs of entrepreneurship? “By fighting every day,” says Binny, 31, as the two burst out laughing. “But seriously, it is important to know what the other guy is thinking. That becomes very important as the message and the thinking become consistent. Communication is key.”

The two are demanding bosses, say their employees. “Both have high expectations, but that raises our bar. That makes working with them rewarding as well,” says Amod Malviya, head of engineering at Flipkart.

He says the Bansals have complementary personalities. While Binny is analytical and driven by logic, Sachin is more instinctive and driven by emotion and passion, says Malviya , who joined the company in 2010 as a senior manager.

Employees are also impressed by the simplicity the duo have managed to retain. As they live close to work, both walk to the office. They also fly and stay budget while travelling and eat with other employees whenever possible. “They are very much in the Azim Premji mould and shy away from ostentation,” says an employee, who did not want to be identified.

Experts say the success of Flipkart can be chalked down to the founders’ attitude. “The two have the right attitude. They are cocky and confident, and along with that they have the ability to execute,” says Arvind Singhal, chairman of retail consultancy Technopak.

This attitude has helped them deal with the ever-shifting baselines in Indian e-commerce. After raising about $190 million (over Rs 1,150 crore) until 2012 from Tiger Global and Accel Partners, industry insiders had begun questioning the viability of the business, which was burning about Rs 50 crore of cash each month.

In 2012, the company took action, by tightening its employee base, using more technology to cut costs and shutting down its music downloads category, which was not scaling up. More importantly Flipkart, which started out as a direct seller of goods, changed to an asset-light marketplace model where multiple merchants, along with the company’s own WS Retail, sell to customers on the site.

In 2013, the company raised $360 million (about Rs 2,200 crore) in two tranches, primarily from South African internet major Naspers at a whopping valuation of $1.6 billion (Rs 9,772 crore). At the time, Sachin termed the cash infusion as a “great validation” and one which refuted the skepticism about his company in particular and Indian e-commerce in general.

Supam Maheshwari, founder of online babycare site Firstcry, says Sachin and Binny managed to find early investors who kept backing them. “They executed well, especially in logistics and warehouse , and did not lose the focus,” says Maheshwari. “But they have had to spend a lot to reach the billion-dollar mark.”

Flipkart’s sales milestone could also send out a signal to international players that the Indian e-commerce market is mature enough for them to enter, says Maheshwari. One such player could be Alibaba , which only has its business-to-business portal at present in the country.

Comparisons with Alibaba’s Jack Ma are inevitable. Ma too started out from a small apartment in China’s Hangzhou in 1999. Ma diversified into payments, cloud computing and multiple e-commerce models. Bansals have made their intentions to diversify clear and have already done so by opening up their online payments solution and logistics for use by other internet companies.

Ma has, however, already beaten Amazon in China. Alibaba expects to triple the volume of transactions to $490 billion (almost Rs 30 lakh crore) in 2016. For Flipkart , the battle has just begun.

Peyush Bansal, founder of Delhi-based eyewear e-tailer Lenskart, says competition will intensify between the large multi-category portals. Amazon, which entered the Indian market a little over six months ago, has rapidly expanded into 18 categories of products and has been busy setting up its logistics and warehouse network. Snapdeal, which is targeting $1 billion in sales next year, recently raised a further Rs 830 crore from investors led by eBay. “The site that would come out on top could be the one with the deepest pockets or the one with the best economic efficiencies,” said Peyush Bansal.

Technopak’s Singhal says Flipkart, which now employs about 10,000 people, will have to continue to maintain its lead in technology, customer experience, supply chain management and consumer logistics to hold onto leadership. “It is like a three-hour movie where just the first 30 minutes are over; the plot is still unfolding,” says Singhal.

Flipkart, which has over 1,000 sellers on its platform, is now shifting focus towards scale with intelligence, which will lead its mobile commerce drive. Sachin believes mobile will revolutionize e-commerce and internet businesses.

“My four-year-old son does not even understand keyboard. He expects the television to also be a touchscreen device,” says Sachin, who expects Flipkart to become a mobile commerce platform in the near future with features customized to individual users. “The next six-and-a-half years are going to be even more exciting.”