This should make for a good KBC question. How many records does Sachin Tendulkar hold? Option 1: 10, Option 2: 20, Option 3: 30, Option 4: 40. The answer is a staggering 69. It’s tough to find another sportsperson who holds so many records.

Given that cricket is a sport driven by numbers. But 69 is indeed a mind-boggling figure. 100 hundreds in international cricket, 15, 847 Test runs, first to score a double hundred in ODIs, most runs in World Cup (2278 runs in 45 matches). The list goes on and on 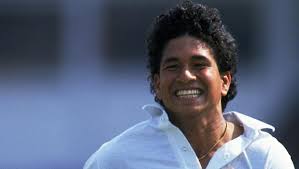 On 14 November 1987, Tendulkar was selected to represent Mumbai in the Ranji Trophy, India’s premier domestic first-class cricket tournament, for the 1987–88 season. However, he was not selected for the final eleven in any of the matches, though he was often used as a substitute fielder.He narrowly missed out playing alongside his idol Gavaskar, who had retired from all forms of cricket after the 1987 Cricket World Cup. A year later, on 11 December 1988, aged just 15 years and 232 days, Tendulkar made his debut for Mumbai against Gujarat at home and scored 100 not out in that match, making him the youngest Indian to score a century on first-class debut. He was handpicked to play for the team by the then Mumbai captain Dilip Vengsarkar after watching him easily negotiating India’s best fast bowler at the time, Kapil Dev, in the Wankhede Stadium nets, where the Indian team had come to play against the touring New Zealand team. He followed this by scoring a century in his first Deodhar and Duleep Trophies, which are also Indian domestic tournaments.

Tendulkar finished the 1988–89 season as Mumbai’s highest run-scorer. He also made an unbeaten century in the Irani Trophy match against Delhi at the start of the 1989–90 season, playing for the Rest of India. Sachin was picked for young Indian team to tour England twice,under the Star Cricket Club banner in 1988 and 1989.

In 1992, at the age of 19, Tendulkar became the first overseas-born player to represent Yorkshire, which prior to Tendulkar joining the team, never selected players even from other English counties.]Selected for Yorkshire as a replacement for the injured Australian fast bowler Craig McDermott, Tendulkar played 16 first-class matches for the county and scored 1070 runs at an average of 46.52.

His first double century(204*) was for Mumbai while playing against the visiting Australian team at the Brabourne Stadium in 1998.He is the only player to score a century in all three of his domestic first-class debuts. Sachin scored a brilliant 233* against Tamil Nadu in Ranji Trophy semifinal in April 2000 in Mumbai,which he still rates as one of his best in Ranji career.

Raj Singh Dungarpur is credited for the selection of Tendulkar for the Indian tour of Pakistan in late 1989, and that also after just one first class season. The Indian selection committee had shown interest in selecting Tendulkar for the tour of the West Indies held earlier that year, but eventually did not select him, as they did not want him to be exposed to the dominant fast bowlers of the West Indies so early in his career. Tendulkar made his Test debut against Pakistan in Karachi in November 1989 aged just 16 years and 223 days. He made just 15 runs, being bowled by Waqar Younis, who also made his debut in that match, but was noted for how he handled numerous blows to his body at the hands of the Pakistani pace attack. In the fourth and final Test in Sialkot, he was hit on the nose by a bouncer bowled by Younis, but he declined medical assistance and continued to bat even as he gushed blood from it. In a 20 over exhibition game in Peshawar, held in parallel with the bilateral series, Tendulkar made 53 runs off 18 balls, including an over in which he scored 27 runs off leg-spinner Abdul Qadir. This was later called “one of the best innings I have seen” by the then Indian captain Krishnamachari Srikkanth. In all, he scored 215 runs at an average of 35.83 in the Test series, and was dismissed without scoring a run in the only One Day International (ODI) he played.

The series was followed by a tour of New Zealand in which he scored 117 runs at an average of 29.25 in Tests including an innings of 88 in the second Test. He was dismissed without scoring in one of the two one-day games he played, and scored 36 in the other.On his next tour, to England in July–August 1990, he became the second youngest cricketer to score a Test century as he made 119 not out in the second Test at Old Trafford in Manchester.Wisden described his innings as “a disciplined display of immense maturity” and also wrote:

“He looked the embodiment of India’s famous opener, Gavaskar, and indeed was wearing a pair of his pads. While he displayed a full repertoire of strokes in compiling his maiden Test hundred, most remarkable were his off-side shots from the back foot. Though only 5ft 5in tall, he was still able to control without difficulty short deliveries from the English pacemen.” 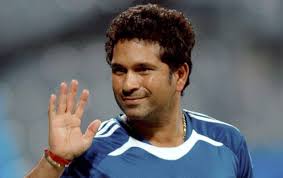 Following poor performance in the 2012 series against England, Tendulkar announced his retirement from One Day Internationals on 23 December 2012, while noting that he will be available for Test cricket.

He announced his retirement from IPL after Mumbai Indians beat Chennai Super Kings by 23 runs at the Eden Gardens in Kolkata on Sunday (26 May) to win the Pepsi Indian Premier League 2013 Sachin retired from Twenty20 cricket and limited-overs cricket,after playing the 2013 Champions League Twenty20 in Sept-Oct 2013 in India for Mumbai Indians.

On 10 October 2013 Sachin Tendulkar announced that he would retire from the longer format after the two-Test series against West Indies in November. Later BCCI confirmed that the two matches will be played at Kolkata and Mumbai, making the farewell happen at his home ground on Tendulkar’s request .