We try to solve your dilemma by pitting the three 7-inch flagship tablets against each other, picking out a winner.

Display The iPad mini 2’s headline feature is its high-resolution Retina display (2048 x 1536 pixels). In fact, this is the only visible upgrade compared to the first-generation iPad mini. The Nexus 7 (2013) features a 1920 x 1200 pixels which is also an upgrade over the previous iteration of the tablet. The display on the iPad mini 2 has a pixel density of 326ppi, while the Nexus 7 (2013)’s display features 323ppi due to its smaller size. So, there’s not much difference between how the two render graphics and text. Some experts who focus on displays claim that the iPad mini with Retina display has a smaller colour gamut due to its reliance on a particular display technology. The Xolo Play Tegra Note still offers a near 720p display at 1280 x 800 pixels, with pixel density of just 215ppi. The Tegra Note’s display is reflective, appears pale in brightness and is in fact a major con.

– Verdict: The Nexus 7 (2013) offers one of the best displays we’ve seen. While Apple has now put a high-resolution, high-ppi display on iPad mini with Retina display, it also expects you to pay a premium. 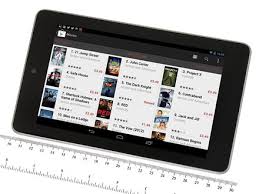 In terms of build quality, the iPad mini 2 stands out with its aluminium chasis and premium finish, just like last year’s iPad mini. The Nexus 7 (2013), with its soft rubberized plastic back feels nice to hold, while the Xolo Play Tegra Note’s partial dimpled textured back gives the illusion of a rugged, gaming focused device, but the rest of the surface looks very plasticky. The Tegra Note’s front panel features front speakers above and below the display panel, which makes the screen appear smaller.

– Verdict: Our vote goes to the iPad mini with retina display. It is now available in a new Space Gray colour option that replaces the Slate and Black one. Apple manages to fit in a comparatively larger display in a compact form factor, without compromising with the fit and finish. Despite being heavier and wider, the iPad mini 2 is leaps ahead of the others in terms of build quality. If you only want to buy an Android tablet, the Nexus 7(2013) is the one to pick up.

Software and app ecosystem The iPad mini with Retina display runs iOS 7, while Nexus 7 and Xolo Tegra Note come with Android 4.4 KitKat and Android 4.2 Jelly Bean, respectively. After initial updates, iOS 7 is very usable on tablets though we’d have to say that some elements of the UI don’t feel native to tablets if you compare it with iOS 6. The Nexus 7 on the other hand offers the very latest version of Android and benefits from priority software updates from Google. The Xolo Play Tegra Note comes with an old version of Android but features an intelligent stylus and apps for jotting down notes and doodling that utilize it.

– Verdict: When it comes to apps, it is difficult to recommend any other tablet over the iPad. Apple iOS offers a much larger variety of quality tablet apps. Apple even offers its own premium lifestyle and office apps, iLife and iWork, free, with new iPads. Content creation apps like Paper and VJay are exclusive to the platform. Apple also offers a good selection of music through iTunes Store. Android tablets are still catching up and mostly run stretched versions of phone apps. The Google Play content stores does offer movies and books, but magazines and music is still missing.

Android is catching up but still lacks quality tablet apps. One particular feature that we like in Android, is user profiles. Tablets can be used by more than one person in the family, so just like computers, deploying different user accounts makes sense.

Performance The iPad mini with Retina display might not look very different from its predecessor, but it features much superior hardware inside. The iPad mini 2 is powered by Apple’s 64-bit A7 chip, that also powers iPad Air and iPhone 5S. It also has M7 motion co-processor for tracking sensor data without burdening the main processor. Apple claims that the iPad mini 2’s chip offers up to 4x the CPU speed and up to 8x the graphics performance of its predecessor.

On the other hand, the Xolo Play Tegra Note is India’s first Tegra 4-powered tablet. The Tegra 4 comes with an additional fifth core for power optimization. Its USP is its gaming prowess and it excels at it. The Nexus 7(2013) is powered by a Qualcomm Snapdragon S4 Pro processor running at 1.5GHz and 2Gb of RAM and offers great performance.

– Verdict: The iPad mini with Retina display offers unmatched power and can run all 3D games and complex apps without any hiccups. The Xolo Play Tegra Note is a gamer’s delight and if you use your tablet primarily for gaming, we recommend the Tegra Note. In terms of synthetic benchmarks (although we do not endorse their use to measure performance), as a reference, the Tegra Note’s scores are three to four times more than that of the Nexus 7(2013).

Value for money At a starting price of Rs 28,900, the iPad mini with Retina display is the most expensive tablet of the lot. While the materials and hardware justify the cost to an extent, another reason for the iPad mini 2 being pricy is Apple’s premium positioning. We also feel that the 16GB base model might not be adequate if you intend to play graphics-rich games and store your media. The Xolo Play Tegra Note has an edge over the other tablets as it offers a memory card slot. It is also the cheapest of the lot at Rs 17,999. The Nexus 7 (2013) also doesn’t offer expandable storage and starts at Rs 20,999.

– Verdict: The Nexus 7 (2013) is a complete package, packing in relatively good hardware, a brilliant HD screen and the promise of the latest software updates, all in a compact, easy to carry around, form factor, without burning a big hole in your pocket. In our view Google’s latest flagship tablet ticks all the right boxes when it comes to the price-to-feature ratio.

Winner The Nexus 7(2013) is the best tablet in the market available, at the moment. However, if you’re paranoid about quality apps and premium hardware, and can afford to spend more, don’t look else where, just go and grab (if you can find the stock) the iPad mini with Retina display.

P.S: It is worth noting that we haven’t compared the cameras on the tablets as we still don’t see it as being one of the major considerations while choosing a tablet. Having said that, all the three tablets offer rear and front cameras that can be used for casual clicks.